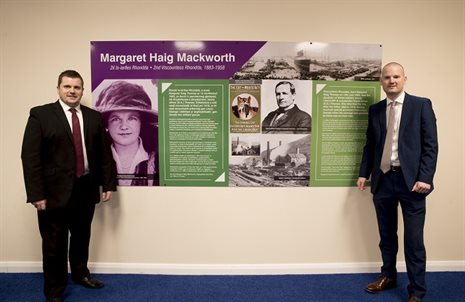 Lady Rhondda is one of three influential female figures to be officially recognised with a Commemorative Panel in RCT.

Speaking at the official re-opening ceremony of Tonypandy Library, Council Leader Andrew Morgan announced that the influential female role model, Lady Rhondda, was to be commemorated at the newly-refurbished Community Room.

In addition, two other female figures – Elaine Morgan OBE and Morfydd Llwyn Owen will also have their stories told at the Mountain Ash Community Hub and at the new Llys Cadwyn Library in Pontypridd respectively.

Lady Rhondda, or Margaret Haig Thomas (later Mackworth) was a prominent business owner, journalist and social campaigner who fought extensively for women’s rights and a fairer society throughout her life.

Lady Rhondda has a strong connection with the Rhondda after taking control of her father’s – D.A. Thomas MP – businesses and title on his death, including the Cambrian Coal Combine.

At the height of her business career, Lady Rhondda was the director of 40 companies, mostly in the coal and media sector.

It was in the media that Lady Rhondda was able to arguably have the most influence, using her Time and Tide weekly publication to advance the aims of the Six Point Group and their programme of six points for a fairer society, including equality for men and women and improved political rights for women.

Also responsible for bringing prominent suffragette Emmeline Pankhurst to Wales, Lady Rhondda set fire to pillar boxes in and around Cardiff, which led to her one-month imprisonment, where she was released after five days of a hunger strike.

Now, future generations of local females can be inspired by Lady Rhondda’s story, following the installation of the commemorative board.

These will be followed by further panels being displayed in the Mountain Ash Hub and Pontypridd Library, once they are completed – meaning that each principal area of the County Borough will house an inspirational panel.

Speaking at the official re-opening of Tonypandy Library, Council Leader, Councillor Andrew Morgan, said: “I was pleased to announce that Lady Rhondda, Elaine Morgan OBE and Morfydd Llwyn Owen will all be rightfully recognised in our County for their valuable contributions to national and local society.

“Unfortunately, none of these influential figures were selected to have a statue erected in Cardiff through the BBC’s Hidden Heroines campaign, so we have taken the decision to ensure that they have their stories told here in RCT, where each has a unique connection and has played a key role in society.

“Lady Rhondda obviously has links to the coal industry here in the Rhondda, so we felt that Tonypandy Library was a fitting and prominent location for her story to be told.

“Elaine Morgan, who was influential in both writing and science, spent a number of years living in Mountain Ash prior to her death in 2013; whilst Morfydd Llwyn Owen, who came from Treforest, was one of Wales’ great musicians and composers before her untimely death at the age of just 26.

“The installation of these panels will ensure that their respective stories can be told and will hopefully inspire future generations of women in RCT to follow in their footsteps.” 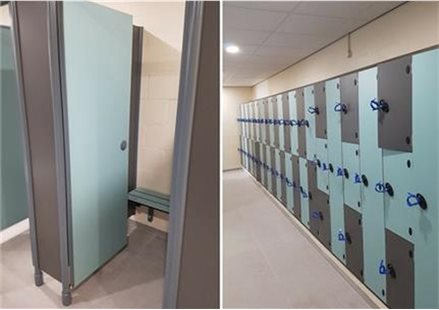 Finishing touches to Rhondda Cynon Taf Council’s £450,000 improvement programme at Abercynon Sports Centre via #RCTInvest will take place at the end of this April.

In late 2018, the swimming pool at Abercynon Sports Centre reopened following refurbishment of the popular pool, including full re-lining of the pool and improving the ventilation, lighting and filter systems, to ensure it can continue to be enjoyed well into the future.

To complete the refurbishment, further work is needs to take place, which will ensure the pool remains to be accessible to all the customers. This will require a full closure of the swimming pool from April 20 to May 7 for these final works to be undertaken.

While the swimming pool at Abercynon Sports Centre is closed from April 20-May 7, customers can use alternative pools in Rhondda Sports Centre, Sobell Leisure Centre, Bronywydd Pool, Llantrisant and Tonyrefail Sports Centres.

Leisure for Life membership offers unlimited access to as many fitness classes, gym sessions, swims and indoor sport bookings as you like – across nine leisure centres – from as little as 67p per day. Find out more and join online here.

Those who have yet to try out all there is to offer with Leisure for Life are reminded of the First Session FREE offer, which allows you to choose any fitness class, gym session or swim at any of our nine leisure centres and enjoy at no cost. The offer runs until April 30.

Until April 30, you can click and download your First Session FREE voucher, which can be used at any of our nine leisure centres for a swim, fitness class or gym session.

Were pleased to welcome Ian back to the Bryncynon area, where he grew up and where many of his family live.

We have conducted regular street walkabouts of Bryntirion, Nant y Fedw and Park View for a number of years and they have proved to be a useful way to pick up issues and concerns from residents as well as ensure that our streets are kept in the best possible condition.

Ian joined us, along with the local Trivallis neighbourhood housing officer, PCSO, local tenants representatives and residents, to walk around Bryntirion in order to find more about our excellent partnership working. We would like to thank Ian for giving up his time to join us and look forward to welcoming him back in the near future. We are sure that the experience will strengthen the working relationships between Councillors, housing officers, the police, local residents and Trivallis.

Keep an eye out for us on our next street walkabout and please feel free to come and say hello.

Abercynon Ward residents can read our latest newsletter for the month of April 2019 by clicking on the link below.

This month the R.C.T Council Cabinet met to discuss the Highways, Transportation &

We are delighted that as part of the programme, £1.756million of capital investment has been allocated to schemes and improvements across Abercynon Ward. The capital investment will include the following: resurfacing of roads and footways, structural works to Pontcynon Road Bridge, works to improve the traffic flow through Abercynon Town Centre and 1/4 Mile Road Junction.

The Council has secured more than £1m from the Welsh Labour Government to wholly an extension to the Park & Ride at Abercynon Train Station. Works started in November, and are due for completion over the next few days. The scheme has revitalised unused land at Navigation Park to introduce 286 standard vehicle spaces, seven disabled spaces and 19 motorcycle spaces – in order to meet current needs and cater for projected future demand from the South Wales Metro improvements, being delivered by 2023, which will see 16 trains per hour serving Abercynon Station.

The project has also included the installation of a two metre-wide footway along the site’s northern boundary, while the existing car park serving Abercynon Railway Station has been realigned to allow bus access.