Remembrance arrangements are slightly different this year due to the Covid 19 restrictions.

The Royal British Legion are encouraging people to stay at home and pay their tributes from their doorsteps.

We will lay wreaths to remember the fallen at St Donats Church next Sunday where we will be joined by invited guests, adhering to the Covid-19 regulations.

We will remember them. Lest we forget.

A weather warning has been issued for heavy rain on Thursday and Friday.

We kindly ask residents to look out for leaves in and around drains. At this time of year there are a large amount of fallen leaves on footway and roads.

If there are leaves around drains we ask residents to clear the leaves ONLY IF IT IS SAFE TO DO SO.

Otherwise please get in touch with us and we can arrange for the Council team to clear the leaves.

Residents may have noticed some works to the Ynysmeurig Road Bridge recently.

These works were carried out in order to inform the design process for repairs to the bridge following a collision with the bridge and general wear and tear.

Council Officers are now working up designs for the repair of the bridge. This bridge is a vital transport link in and out of Abercynon Town Centre.

We have asked Council Officers to bring forward the repairs as soon as possible. There has been a delay in the repairs due to Storm Dennis earlier this year which damaged many bridges across Rhondda Cynon Taf and Covid -19 restrictions.

We will keep residents updated as things progress.

We are greatly saddened to hear about the passing of Alby Davies MBE over the weekend. He was a dedicated public servant and family man who had such an important impact on his community and the people who live there.

Cllr Rhys Lewis shares some of his thoughts and memories of Alby Davies MBE below as we remember his life.

Alby Davies was quite simply a name that you knew if you grew up and lived in Abercynon. Whether you had a concern, complaint or a grumble, Councillor Alby Davies was always on call to help. In the Abercynon area, Alby was the byword for the Council.

And that’s no surprise. Alby served as Councillor for Abercynon Ward ( including Ynysboeth, Tyntetown and Nant y Fedw) for an impressive 46 years. In an incredible career as a public representative, he served his community on three different Councils. He started on the Mountain Ash Urban District Council in 1971 until it was reorganised in 1974 to become Cynon Valley Borough Council. He would serve as Mayor of Cynon Valley in the 1980’s going on to become the Chairman of Leisure Services. He was proud of the part that he played in developing and growing Council leisure and recreational facilities in the Cynon Valley including Abercynon Sports Centre and Mountain Ash Bowls Centre. He was an avid supporter of Abercynon RFC, where he served as a committee member, and Abercynon Cricket Club, playing in the team. He was also Vice-President of Cor Meibion Abercynon. Rhondda Cynon Taf Council was created in 1996 and Alby would go on to serve as Mayor of R.C.T in 2004. He was later awarded an MBE in recognition of his service to his community and public life. He retired in 2017, a truly remarkable career.

Outside of the Council, Alby was well known as a successful sportsman. He was an impressive amateur boxing champion in his younger years and trained with his childhood best friend David Dower MBE, also a fellow Abercynon resident, who would go on to become the Welsh, British, European and Empire Fly-weight boxing champion at the 1954 Empire (Commonwealth) Games. Alby was also a accomplished professional football player, playing for clubs such as Newport County, Brecon and Ton Pentre. He achieved a Welsh Schoolboys Cap when he started for Wales v England at Ninian Park, Cardiff. He completed his National service in the army as training instructor. He would recall that that he was almost drafted to serve in the Korean War but was so highly valued as an instructor by senior army officers that he was kept in the UK to get the troops fit for war duty.

Alby Davies was known for his friendly disposition with a great sense of humour. He was universally liked by all who met him. I can vividly remember walking (nervously) into my first Abercynon & Ynysybwl Labour Party Branch meeting in 2009 to be greeted by Alby who offered me a friendly welcome and quickly put me at ease. He told me that one of his first jobs was at Abercynon Colliery where he worked in the National Union of Mineworkers Lodge office. At the time the Abercynon Miner’s Lodge Secretary was my Great- Grandfather Tom Taylor, a man who Alby greatly admired. After I explained to him that my interest in politics came from my family history in the mining industry and trade unionism, we got on superbly. He became a mentor of mine and I deeply respected him. Alby also worked at the British Airways plant in Nantgarw for many years.

As many people who knew Alby will testify, he was full of encouraging words for young people. Even though he was well into his 70’s when we first started campaigning together, he always took the time to offer his wisdom and advice to me and I witnessed him frequently go out of his way to approach and speak to groups of young people to ask them what they thought of the community and how they thought the community could be improved.

Alby was a Labour Party man through and through. He believed that the communities and people of the Valleys deserved the very best public services and investment as the workers had given so much in blood, sweat and tears to build the wealth of our country. He kept on the moderate Labour Party path of gradual reform for better living and working conditions for ordinary people. He would recall how he resisted the calls from some of the more radical communist miners at Abercynon Colliery who called for revolution. He was an avid campaigner, always willing to get out onto the streets to knock doors and speak to people. He truly believed in the worth of speaking to people about their experiences and their view of the world even if he did not necessity agree with their point of view. In true sporting fashion, whatever disagreements he may have had with people, they rarely resulted in any lasting bitterness. He always pushed the case for more funding for local government as he believed, quite rightly, that as the tier of government closest to the people, councillors were best placed to make decisions about our local communities.

Alby was a dedicated family man. He loved spending time with his late wife Wendy with whom he enjoyed a long and happy marriage and enjoyed their regular annual holidays to Las Vegas with friends, although as always he explained with a wink of his eye, he could never explain why it was known as ‘The City of Sin’. He was very proud of his daughters, grandchildren and great grandchildren. I know that they will miss him deeply.

The whole community will mourn the passing of Alby Davies. He made such an lasting impression on so many people’s lives. He was a friend, colleague and family man. The community of Abercynon is a much sadder place without his presence. To have made such a positive contribution to the communities of the Valleys and his own in Abercynon (or ‘The Riviera of the Cynon Valley’ as he called it) is something that deserves recognition and celebration. I have attempted to capture the essence of Alby’s life in this short piece but I could write so much more. I hope that I have done him justice.

We say farewell to a remarkable man. They simply do not make them like that anymore.

Merthyr Cynon Foodbank is starting up a centre in Abercynon at St Donat’s Church in October. We will be open 11am to 1pm every Tuesday and we’re looking to form a team of people who can:

* be available once or twice a month to meet clients and put together their food parcels, * people to organise local collections in the village (pop up donation sites and shops), * people to help with occasional small admin/publicity tasks.

Please contact Peter Lewis on 07944056335 or respond below if you’d like to find out more. There will be training on Tuesday 15th September in the church at 1pm for those interacting with clients and managing the food.

We have received an update from Council Officers about the future of the Feeder Bridge on the Taff Trail.

Sadly the historic bridge, built nearly 200 years ago to provide the Glamorganshire Canal with water, was badly damaged by debris brought down by high river levels during Storm Dennis.

Council officers have assessed the condition of the bridge since it’s closure following the Storm Dennis. The footway across the bridge is damaged beyond repair and will have to be replaced. The historic stone piers and metal pipes will remain and a new footpath will be installed.

Council Officers have indicated that works to remove the current footway will take place at the end of September allowing for good weather.

We will keep residents informed as the works progress.

Traffic flow improvements to be implemented through Abercynon 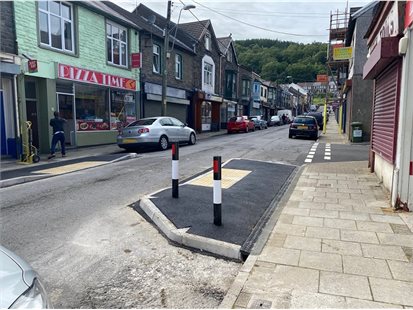 The Council will implement new traffic arrangements through the centre of Abercynon from Thursday (June 25), including the new one-way system coming into effect – as part of an effort to improve traffic flow in the area.

During September 2019, the Council started a three-week consultation with residents over proposed significant highway improvements – and received largely positive feedback from 136 people who attended a public exhibition and 61 others who contacted the Council separately. Work started on site in February 2020, towards making the following changes through Abercynon:

Work to the Station Road/Ynysmeurig Road junction was completed during February 2020, and activity towards implementing the one-way system has been ongoing since. While work has progressed in recent weeks and months, the scheme has been delayed due to the Coronavirus national emergency.

Work on the build-outs at the lower section of Margaret Street is being finalised during the week commencing Monday, June 22.

The one-way system and associated waiting restrictions will come into effect from Thursday, June 25, with signage following to implement the new 20mph speed limit in the centre of Abercynon. While Officers will be on site throughout to oversee the one-way system coming into effect, residents and road users are advised that some traffic disruption is inevitable as road users become familiar with the new arrangements.

Once this is implemented, the wider scheme will continue in order to remove the current bus stop at Water Street, and complete the build-outs tou the upper section of Margaret Street. Signage will also be installed to indicate the new 20mph speed limits coming into effect through Carnetown and Glancynon.

This scheme has been wholly funded by Welsh Government, utilising funding for the 2019/20 financial year. The Council would like to thank residents and road users for their continued cooperation, as these works are implemented for the benefit of the community through this busy area.